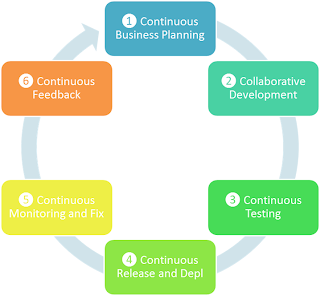 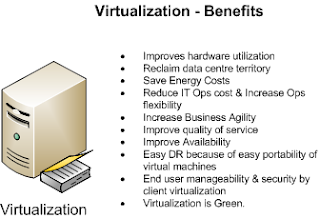 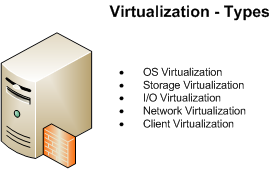 **Hardware Emulation and Paravirtualization are not discussed.

"The physical storage resources (such as disk drives) are aggregated into storage pools, from which the logical storage is created and presented to the application environment." (Definition courtesy - Hewlett Packard (HP)).

Storage Virtualization can be implemented : a. Within Storage Arrays (called array based virtualization) b. at n/w level "where multiple disk arrays or networked storage systems from different vendors, scattered over the network, can be pooled into a single monolithic storage device. This allows the multiple arrays to be managed uniformly as if they were a single pool" (Courtesy HP).

Network Storage systems are of two types: SAN and NAS.

5. Client virtualization ( achieved by Application Virtualization and Desktop Virtualization)Application virtualization refers to a separation of program execution from program display; in other words, a program like MS word executes on a server located in the data center but the graphical output is sent to a remote client device. The end user sees the full graphical display of the program and is able to interact with it via keyboard and mouse.